The Brijuni are a group of fourteen small islands in the Croatian part of the northern Adriatic Sea, separated from the west coast of the Istrian peninsula by the narrow Fažana Strait. The largest island, Veliki Brijun Island (also known as Brioni Grande or Veli Brijun), (5.6 km2), lies 2 kilometres (1 mile) off the coast. The other islands are Mali Brijun, San Marco, Gaz, Okrugljak, Supin, Supinič, Galija, Grunj, Krasnica (Vanga), Madona, Vrsar, Jerolim and Kozada. Famous for their scenic beauty, the islands are a holiday resort and a Croatian National Park.

Map of the Brijuni islands

The Brijuni Islands had some Ancient Roman settlements, but up to the late 19th century the islands were mainly used for their quarries, which have been worked on for centuries. The islands belonged to Venice from the Middle Ages, and stone from the islands was used to build the palaces and bridges of the city.The islands were part of the Illyrian Provinces after Napoleon’s brief annexation.

In 1815 the islands became part of the Austrian Empire, which later became Austria-Hungary. During this period the islands’ quarries first supplied stone to Vienna and Berlin. With the erection of a naval base in the harbour of Pula, the Austrians built a strong fortress, “Fort Tegetthoff,” on Veliki Brijun Island Island, together with minor fortifications on some of the others.

The Austro-Hungarian Navy abandoned the fortress, and in 1893 the Viennese business magnate Paul Kupelwieser bought the whole archipelago and created an exclusive beach resort. The estate was supplemented with first class hotels, restaurants, beach resorts, a casino and a yacht harbour and became a focal point in social life on the Austrian Riviera. Kupelwieser also established a sailing regatta, a golf course and – due to the flourish of Austrian Culture – various music concert and literature events. The Brijuni islands became popular as a destination for the Viennese upper class and were visited by members of the Imperial family and other wealthy European bourgeois and aristocrats. 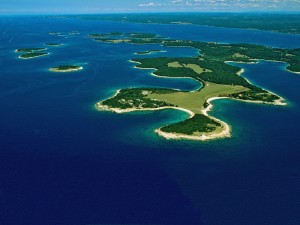 In 1918 after World War I Brijuni became part of the state of Italy. Karl Kupelwieser, the son of the founder of the estate tried to maintain the former splendor, but after the economic crisis following the Wall Street Crash of 1929, the estate went bankrupt and Karl committed suicide. In 1930 ownership of the islands was acquired by the Italian government due to the bankruptcy, and they remained part of Italy until the capitulation in 1943.

In 1945 after World War II the Brijuni became part of Yugoslavia and President Marshal Josip Broz Tito made the Brijuni Islands his personal State Summer Residence. Slovenian architect Jože Plečnik designed a pavilion for Tito. Almost 100 foreign heads of state visited Tito on his islands, along with film stars including Elizabeth Taylor, Richard Burton, Sophia Loren, Carlo Ponti, and Gina Lollobrigida. Tito died in 1980, and by 1983 the islands were declared a National Park of Yugoslavia. 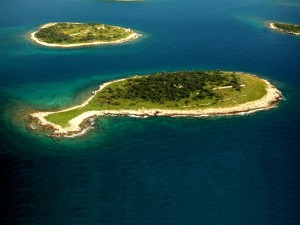 In mid-July 1956, President of Egypt Gamal Abdel Nasser, Prime Minister of India Jawaharlal Nehru, and President of Yugoslavia Josip Broz Tito met here to discuss their opposition to the Cold War. These ideas later crystallized into the Non-Aligned Movement. Vijay Prashad has compared this meeting to the Yalta Conference.

In 1991 Croatia gained independence and made the Brijuni Islands an International Conference Center (see Brijuni Agreement). Four hotels on Veliki Brijun Island were re-opened, as well as a Safari Park, which holds animals given to Tito, such as Sony and Lanka, two Indian elephants donated by Indira Gandhi. Sony, who was donated to Tito in 1970 as a two-year-old calf, died in 2010. The International Brijuni Polo Tournament, dating back to Karl Kupelwieser‘s Austro-Italian Brijuni in 1924, has been re-continued since 2004.

The majority of the flora on the archipelago of the Brijuni islands has the typical Mediterranean characteristics. On Veliki Brijun Island there are about 600 indigenous plant species. Here cedars, bamboos, and the pyramidal yew have become acclimatised, while on Vanga the dwarf spruce grows. There is also much exotic vegetation that Tito received from foreign statesmen.[1] The most important plant associations of Veliki Brijun Island are: Maquis shrubland, Holm Oak, and Laurel forest, and Conifers, which are very characteristic of the region.

It is interesting to point out that on the islands there are some plant species that are among the endangered plant species of Istria (marine poppy, wild cucumber, some grass species etc.), but on the islands they are quite widespread and develop freely. The most valuable part of the island from the point of view of vegetation stretches from the Villa Brijunka in the south, and the most lovely forest is found in the east of the White Villa.

Because of the millennial presence of men on the archipelago of Brijuni, the animal world on the islands, especially Veliki Brijun, besides the autochthonous species, was enriched by many imported species that are not congenial to this habitat but got acclimated to it thanks to the almost ideal microclimatic conditions. Inside the park there is an ethno park is an area within the Safari park presenting a typical Istrian homestead with its autochthonous animal species. Istrian ox (a descendent of the Aurochs), Istrian sheep, donkeys and goats. It is intended both as a habitat and presentation of domestic animals of Istria. 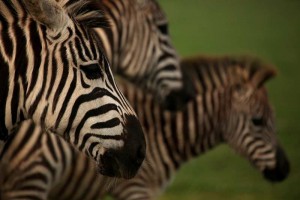 In addition, the chital deer, the Fallow deer and mouflons were introduced to the Veliki Brijun Island in the early 20th century. Their numbers increased in the following decades and can be seen roaming freely around the island.

In the late 19th century and early 20th century the European Hare, the Chital, the Fallow Deer and the Mouflon were imported, so their descendants still adorn the forests, parks and glades of Brijuni and are part of its identity. The autochthonous birds are quite well represented. Some of the smaller islands are excellent habitats where gulls and sea swallows nest, as well as some rare genera of Cormorants. The Brionian islands are also important seasonal habitats of northern bird species and the most interesting is the locality of Saline. That is a very damp area with three marshy lakes of 8 acres (32,000 m2) of fenced area with the aim of forming an Ornithology reservation. The biggest lake is overgrown with reed and is a good nestling ground for numerous types of birds. 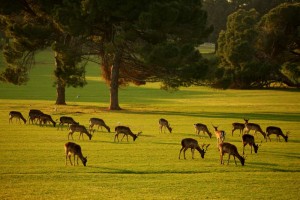 On the island there is also a Safari Park, it is home to a variety of exotic animals which were given to the park as gifts from diplomatic partners. The Nilgai, Zebu and Asian Elephant were donated as a gift from India, Plains Zebra and Mountain Zebra were given by Ahmed Sékou Touré from Guinea, Waterbuck came from Ethiopia.

The local seas of the Brijuni archipelago are important hatching grounds and representative Marine Parks for the typical marine organisms of the northern Adriatic. Of the marine organisms that are protected by the Law on Environmental Conservation in the waters of Brijuni you can find the pen-shell and the date-shell. Turtles and dolphins, the protected marine vertebrates, can also from time to time be seen in the waters of Brijuni. There are also some endemic species like the black tang, Jadranski bračić, and the Tunicate, Jadranski ciganin.

The seabed abounds in sponges, shellfish, sea urchins, crustaceans, fish etc. In the past in the seas of Brijuni were found some species that were never seen in the Adriatic, as well as some species up to then unknown to scientists like the soft coral Alcyonium brionense or the variety of the sponge Ircinia variabilis fistulata.

Antropoti offer you day trips to the Veli Brijun. The sightseeing tour includes: a ride by tourist train, visit to the remains of the Roman villa rustica from the I. century B.C in the bay of Verige, and the safari park which breeds the following animals: zebra, Somali sheep, zebu, llama, elephants etc. The tour also includes visits to the archaeological museum located in the Citadel building from the XVI century and the Church of St. Germain with permanent exbition of copies of frescoes and Glagolitic writings from Istria. The sightseeing of the island of Veliki Brijun is organized under an expert guidance in Croatia, Italian, German, Russian and English.