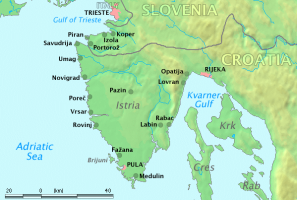 Istria‬ is a Croatian largest peninsula placed on the north side of the Adriatic Sea‬, on a territory of Slovenia, Croatia and Italy. Geographical boundery line spreads from Milje Bay (Italian Muggia) to Preluka Bay, taking Opatija as a part of the Istrian peninsula too. Istria is divided into two counties: Istarska and Primorsko-goranska.

The largest part of Istria belongs to the Istarska county including some of major places:Pula, Pazin, Poreč, Rovinj, Opatija, Umag, Novigrad, Labin, Buzet, Motovun, Kopar i Piran. Being one of the most developed and a beautiful region of Croatia, Istria is the centre of elite tourism. Inland Istria is characterized by forests and lush green landscapes, while the coastal Istria benefits from the crystal clean blue sea… a small paradise.