Croatia – a land of a thousand islands, magnificent nature, treasure trove of impressive history and gastronomy of different regions.

• 56,542 square kilometers, with an additional 31,067 square kilometers of territorial waters.
• Population: 4.290.000
• The majority of the population are Croats. The ethnic minorities include Serbs, Hungarians, Czechs, Italians and others.
• Capital city: Zagreb (792.875)
• Length of coast: 5,835 km – including 4,058 km of island, islet and reef coastline.
• Number of islands, islets and reefs: 1,185 among which 67 islands are inhabited. The largest islands are Krk, Cres, Brač and Hvar.
• Official language and alphabet: Croatian language and Latin alphabet.

Historical Complex of Split with the Palace of Diocletian (1979)
The Emperor’s Palace is one of the most significant objects of the late antique architecture not only for its level of preservation, but for various original architects forms which are announcing new early Christian, Byzantine and early Middle Aged art. The Mausoleum of Diocletian was transformed into the Christian church in the 5th century. Inside the palaces’ Roman walls there is a harmony between Romanesque churches from the 12th and 13th centuries, Middle Ages fortresses and Gothic, Renaissance and Baroque palaces.
Official pages of the Town of Split

Dubrovnik, late Middle Ages planned city on the south Dalmatian coast became an important Mediterranean sea power in the 13th century. Although severely damaged by an earthquake in 1667, Dubrovnik managed to preserve its beautiful Gothic, Renaissance and Baroque churches, monasteries, palaces and fountains. Damaged again during the Independence War, Dubrovnik was included on the list of endangered world heritage of UNESCO in a period between 1991 and 1998.

The beauty and attractiveness of the Plitvice arose from the tuff and travertine plants. Plitvice Lakes National Park contains a series of 16 beautiful lakes, caves and waterfalls. These have been formed by processes typical of karst landscapes such as the deposition of travertine barriers, creating natural dams. It’s a magnificent architectural nature phenomena surrounded by thick forests inhabited by bears, wolves and various rare animal and bird species. 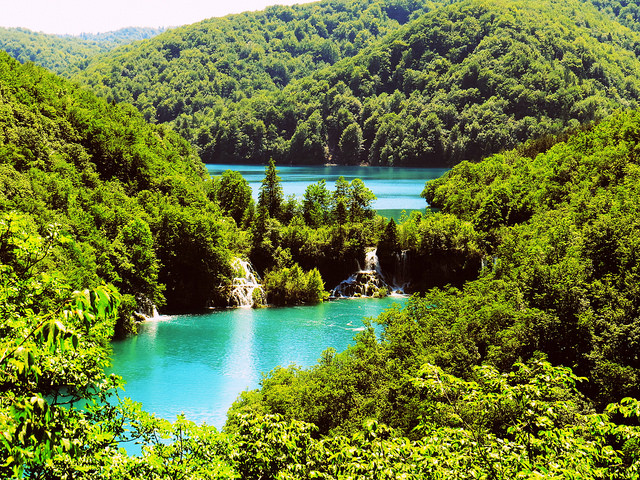 The Episcopal Complex got its name by a bishop Euphrasius who thoroughly renovated the cathedral and decorated it with famous mosaics in the middle of the 6th century. Before Euphrasius, there were at least two phases of early Christians objects on the same site. Christianity was founded in Porec in the 4th century and the basilica, atrium, baptistery and episcopal palace represent religious architecture, while the basilica combines the elements of the classicism and Byzantium. Apse is lavishly decorated with mosaic which is one of the most significant of the kind in Europe.

Trogir is a remarkable example of urban continuity. The orthogonal street plan of this island settlement dates back to the Hellenistic period and it was embellished by successive rulers with many fine public and domestic buildings and fortifications. Its beautiful Romanesque churches are complemented by the outstanding Renaissance and Baroque buildings from the Venetian period. The most significant object is a Cathedral with the Roman gateway (main west portal), master piece of the local architect Master sculptor Radovan and stands as an example of Roman-Gothic art in Croatia.

The Cathedral of St James in Šibenik built in a period between 1431 and 1535 bears witness to the considerable exchanges in the field of monumental arts between Northern Italy, Dalmatia and Tuscany in the 15th and 16th centuries. The three architects who succeeded one another in the construction of the Cathedral – Francesco di Giacomo, Georgius Mathei Dalmaticus and Niccolò di Giovanni Fiorentino – developed a structure built entirely from stone and using unique construction techniques for the vaulting and the dome of the Cathedral. The result is a harmony between stones, method of stacking and the cathedral ambience.

The Stari Grad Plain is Croatia’s 7th location protected by UNESCO, registered in 2008, on the 32th session of the UNESCO World Heritage Committee in Quebec, Canada.
Stari Grad Plain on the Adriatic island of Hvar is a cultural landscape that has remained practically intact since it was first colonized by Ionian Greeks from Paros in the 4th century BC. The original agricultural activity of this fertile plain, mainly centring on grapes and olives, has been maintained since Greek times to the present. The site is also a natural reserve. The landscape features ancient stone walls and trims, or small stone shelters, and bears testimony to the ancient geometrical system of land division used by the ancient Greeks, the chora which has remained virtually intact over 24 centuries.

UNESCO Representative List of the Intangible Cultural Heritage of the world

The coastal region is characterized by the influences of the Greeks, Romans, Illyrians and later Mediterranean cuisines – Italian and French. It features many seafood specialties (squid, cuttlefish, octopus, shrimp, lobster…) prepared in various ways, olive oil, prosciutto, various vegetables, Dalmatian wines such as Babić, Malvasia, Prosecco and Vrbnik Žlahtina, and various liqueurs like the famous Maraschino.

The Adriatic Sea, named after an ancient port, is an arm of the Mediterranean Sea, between Italy and the Balkan Peninsula. It is between 58 and 140 mi (93-225 km) wide, with a maximum depth of approximately 4-100 ft (1,250 m). The name has existed since the Antique; in Latin it was Mare Hadriaticum. In modern languages, it’s Mare Adriatico in Italian and Jadransko more in Croatian.
The northern part of the sea is very shallow, and between the southern promontories of Istria and Rimini the depth rarely exceeds 25 fathoms (46 m). Between Šibenik and Ortona a well-marked depression occurs, a considerable area of which exceeds 100 fathoms (180 m) in depth. The deepest part of the sea lies east of Monte Gargano, south of Dubrovnik, and west of Durrës where a large basin gives depths of 500 fathoms (900 m) or more, and a small area in the south of this basin falls below 800 (1,460 m). The mean depth of the sea is estimated at 133 fathoms (240 m).
The climate in the Adriatic is typically a Mediterranean one, with mild rainy winters, and hot and dry summers. Summer temperatures rise up to 34°C in July in the northern part, and up to as much as 38°C in the southern part (Dubrovnik).